These past two days, I have sat in on the afternoon sessions of the George Zimmerman trial. This week the focus in the court room is on jury selection.

My involvement as a pastoral observer is by invitation of Mr. Thomas Battles from the United States Justice Department, Reconciliation Division. Prior to this case, I actually was unaware that the Justice Department had such a division. My understanding is that the agents in this division are not so much involved in law enforcement and investigations, but in drawing along side a community where there is a high potential for, or occasion of, social unrest.  They are seeking public peace and resolution of division, in other words, peacemaking.

Personally speaking, I am a little wary of government involvement in church opinions and activities. However, to this point I have never been asked to say or do anything which would violate my Christian call. On the contrary, we are being invited by the governing officials, both local and national, to do the very thing we are eager to do, and that is being servants of the ministry of reconciliation in our community. Pastors along with all Christians are called to a ministry of reconciliation through the Gospel. As Jesus taught us, “Blessed are the peacemakers.”

In these meetings, there has also been the desire to facilitate a healthy dialogue with the clergy of Sanford and the city officials in order to constructively address community concerns even beyond the particulars of this case. The clergy represent diverse perspectives and backgrounds, large and small congregations, differing denominational and non-denominational affiliations. The clergy in the group are diverse racially and ethnically. Perhaps more than any other group in the community, we have the ability to bridge socio-economic, racial and political divides and seek true unity. As a group, we are calling ourselves Sanford Pastors Connecting.

Many of these clergy including myself have also been meeting and working together outside the official Justice Department group purposefully seeking spiritual renewal and reconciliation in our community. Our common desire is to continue to build a stronger Christian community and witness in Seminole County long after this trial has faded from public attention.

The George Zimmerman trial is obviously under intense scrutiny both within and outside the Sanford/Seminole County community. The hope for the clergy participation is to provide a prayerful presence for all who are involved in the case and to be an encouragement and source of support for the larger community.  Many of the employees of the court have already personally expressed gratitude for our presence and support.

In the courtroom, there is substantial reserved seating for the media. In fact, five of the seven rows on the defense side of the court room are reserved seating for the media–the first two rows being reserved for the Zimmerman family and their legal representation. On the prosecution side, the first row is reserved for the prosecuting attorneys and the second for the Martin family. The public is provided seats in the remaining rows behind the Martin family. This public section is where you will see the clergy sitting as the case unfolds.

Pastor Joel Hunter at George Zimmerman Trial. The Sanford Pastors Connecting will be sitting in the Public seating located on the prosecutors side. There are four or five rows of seating reserved for the public directly behind the two rows reserved for the Prosecution legal team and the Martin Family.

As pastors, we have consistently offered prayer with one another, for George Zimmerman, for the Martin family and for the Zimmerman family. We have prayed for the law enforcement, for the court officials and for the attorneys. We have prayed for those working in the media. And we have been especially concerned in our prayers for the well-being, peace and support of our community as it comes under national attention. We must continue to live together long after the outside spotlight leaves our community.

As I have sat through two days of the jury selection, I am very mindful of the individuals who have been asked to serve as jurors. The attorneys from both sides are indicating that the trial could take up to one month. This is a tremendous sacrifice for anyone, but for some it would represent a major financial challenge and sacrifice. When a potential juror or group of jurors enters and leaves the courtroom, etiquette calls for all to stand out of respect for them. They do deserve the community’s respect.

I heard many perspectives and concerns of the community by listening to the juror’s answers. Some were clearly concerned about the mass demonstrations in Sanford; one young man called them “rants and riots”, another called it a “circus”, others were not so concerned and saw it as an expression of free speech. More than one expressed sadness at the events of the case itself. One juror, when asked to sum up the case in three points said, “A young man lost his life; another man is fighting for his life; and no one is a winner.”

Often, it seemed to me that both the jurors and the attorneys were putting the media on trial today. There were many questions related to media bias and misinformation in the media, such as their publishing earlier photos of Trayvon Martin as a younger boy compared to his current age.  The media initially stated that George Zimmerman had no injuries, and later reported that he did. One juror indicated that such misreporting led to wrong opinions at first. Some were asked whether it seemed that the media was “taking sides”. 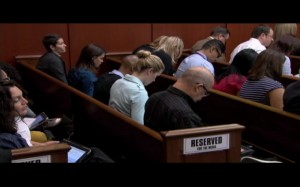 The defense side of the gallery at the George Zimmerman Trial. There is no public seating on this side as the rows are entirely reserved for members of the press save two rows for the Zimmerman family and the defendant’s legal team.

More than one juror indicated that they “tuned out” the media coverage or treated the news with certain skepticism, with “a grain of salt”. Many expressed frustration with excessive media coverage of this case, and their promotion of negativity.  One juror questioned, “How long is the media going to avalanche us with this?”

I have been impressed by the expressions of commitment on the part of potential jurors for their willingness to serve, regarding it as a civic responsibility in spite of the challenges. There is a motion being considered by the judge to conceal the juror’s identities for an extended period a time. They will have an important job and they deserve our prayers for protection, provision and wisdom. They are worthy of appreciation for serving the system of human justice in our community.

Many of the potential jurors have appeared nervous as they were asked a multitude of questions. Mr. Zimmerman’s attorney, Mark O’Mara, asked one juror if she understood what we were doing in the jury selection process. She replied, “Working to give Mr. Zimmerman a fair trial.”

I was impressed by how this is accomplished in our system. Both the prosecutors and defense (including Mr. Zimmerman) have the opportunity to veto a limited number of prospective jurors without cause. Personally, I had not realized that Mr. Zimmerman has the civil right to object to any juror. At the end of each day of jury selection, Mr. Zimmerman was asked directly by the judge whether he approved of his lawyer’s questions and selections from the jury pool. He replied, “Yes, your honor.”

I was struck by the fact that it was these individual jurors unwillingness to draw conclusions, make assumptions and pre-judge the facts and parties involved in this case which makes them uniquely qualified to become the ones who will ultimately determine this trial’s verdict. How many of us can say that we have reserved judgment, that we have not assumed? How many of us have spoken words without full knowledge or judged the parties involved without all the facts?

Indeed, the dangers and pitfalls of making “assumptions” and “pre-judgments” reside at the very heart of all that is involved in this case both inside and outside the courtroom. Humanly speaking it is very difficult to give the benefit of the doubt, particularly when our past experiences and personal histories include hurts and violations. There are important lessons to learn in all of this, if we only have eyes to see and ears to hear.

The pastors who have committed to attending the trial have a united commitment to seek the well-being and peace for our community and the unity of the Church under one Lord Jesus Christ; please join us in praying to this end.

I would love for you to express your thoughts on my blog in order to strengthen our common conversation. What is your take away from this post? What question does the post leave you wondering? Let's get some discussion going! Please note that for the sake of the trust of my readers, I do reserve the right to remove comments that are offensive or off-topic.

This site uses Akismet to reduce spam. Learn how your comment data is processed.

If you would like to receive updates to my blog to your email, please sign up below and I will send you a link to a free copy of my ebook, "The Reformer: God's Leader for a Broken World." Thank you for subscribing!