I would like to give you all a bit of an update on the Trayvon Martin situation here in the Diocese. I will not fill you in on the things that you get from the news but some of the things you may not know.

The first thing that I would say is that it is not helpful to engage in inflammatory rhetoric such as pre-judging the verdict of Mr. Zimmerman’s trial. The justice system in the US is human and imperfect. Yet it is the best the world has to offer. In this instance, it is working.

Much of the lesson of this case is about making pre-judgments before facts are known or processes have played out. As a church, we must do better than the world. Also, recognize that many of the leaders involved down here are our fellow Episcopal parishioners and part of our mission field. They do not need the larger church making their jobs more difficult by rash statements. This is a plea for us all to speak wisely.

The shooting took place at an apartment complex less than two miles from St. Peter’s (my congregation) and across the street from my daughter’s school. Several days ago a police car was parked on the school grounds as a deterrent. The next day it had been riddled with bullet holes.

Half the kids did not show up for school that day.

Fr. Rory Harris and I are the rectors of the two closest parishes and we are very much publically involved in the community especially in this issue. The first was in organizing an ecumenical Good Friday Prayer service for local ministers at Holy Cross Episcopal Sanford (read my sermon here). Over 60 clergy from a wide variety of denominations and ethnic/race groups were represented in the leading and participation. We took the entire situation to the foot of the cross.

The various clergy of Sanford and Seminole County are coming together in Holy Spirit appointed ways through this human tragedy. I will share with you a report that I wrote to the Bishop and clergy of Central Florida

Three significant clergy meetings were held in our area today (4/12/12) related to the Trayvon Martin case.

The first was at noon at Allen Chapel AME, Valerie Houston, Pastor. She was one of the preachers at the Good Friday clergy prayer gathering. 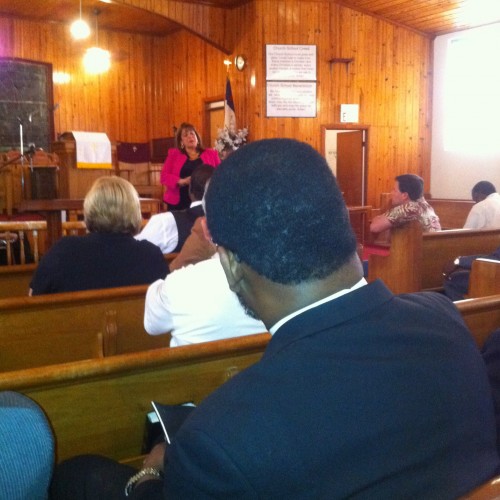 At this meeting the state special prosecutor, Angela Corey, and the newly assigned prosecuting attorney, and the Federal Justice Department community relations person, Mr. Battles, all presented and opened up for discussion with about 30 local pastors mostly from the local black churches. Dr. Raleigh Washington, president of Promise Keepers, was also present.

Corey revealed that she is a member at St. John Episcopal Cathedral in Jacksonville. They were all very open about their faith and called on the pastors to lead in the community and become the voice of the community rather than allow unauthorized spokespersons who may not represent the community well.

They spoke about the importance of patience, their passion for the victims of crimes and the need for justice for Mr. Martin and due process for Mr. Zimmerman. They asked for our prayers for ALL involved.

The second meeting was with Raleigh Washington and the black ministers of Sanford. I did not attend that meeting.

The third meeting at Charisma Media (formerly Strang Communications) in Lake Mary was very well attended, probably about 100 pastors and church leaders, 20 or so from Sanford. Some, but by no means all, of the black clergy that were at the other two meetings came to this as well.

Dr. Washington spoke from 2 Corinthians 5 about the need for the church to seize this opportunity to bring the ministry of radical reconciliation as ambassadors of Christ. He was great actually! Lots of other folks spoke and shared thoughts. One of the significant words came from Joel Hunter, Northland, that a leader from Sanford needed to be raised up.

Toward the end of the meeting a young black minister, Rev. Derek Gay, felt the call. He has been connected with some of the key meetings with leaders in the city and the Martin’s particularly the one about whether to release the 911 tapes. In a very moving moment Sam Hinn, pastor of the Gathering Place and yes Benny’s brother, knelt and committed to being Rev. Gay’s, Aaron. Then all of the other ministers from Sanford in the room stood with young Rev. Gay and pledged support and action.

Raleigh Washington sealed the moment in prayer as a divine commission and work. We all committed to stepping up and being the leaders for such a time as this.

Many spoke of the possibility that national renewal and revival might begin with Sanford Florida if the church will repent, pray and lead toward relationship. Relationship being the key word in Raleigh Washington’s challenge. It was also recognized by several that any renewal must have at its heart (and even must begin with) the youth.

Tomorrow there will be a press conference on the steps of Holy Cross Episcopal Church at 10 am. The entire event at Charisma Media was filmed. Reported Here and full press conference.

Personally, I believe the Lord is going to use this tragic moment to bring our community together in some very good and profound ways. He will be glorified in this, we have seen it. Certainly there is lots to pray about. Please pray for Sanford and the Lord’s leading and protection of the people of our community.

I would love for you to express your thoughts on my blog in order to strengthen our common conversation. What is your take away from this post? What question does the post leave you wondering? Let's get some discussion going! Please note that for the sake of the trust of my readers, I do reserve the right to remove comments that are offensive or off-topic.

This site uses Akismet to reduce spam. Learn how your comment data is processed.

If you would like to receive updates to my blog to your email, please sign up below and I will send you a link to a free copy of my new ebook The Reformer: God's Leader for a Broken World. Thank you for subscribing!